One of the most important improvements in lighthouses came with the development of the Fresnel lens. This lens, made up of multiple prisms which focus and amplify the light beam emitted from the lantern, revolutionized the lighthouse and increased its range and effectiveness for mariners.

The developer of the lens was an obscure French physicist, Augustine-Jean Fresnel (pronounced “Fraynel”), born in 1788. While assigned to civil engineering projects, such as roads and bridges, Fresnel developed an interest in light and began working on a method of focusing it.

Early lighthouses used a combination of a bulls-eye lens and a parabolic reflector to direct the light, an inefficient method that allowed light to escape at the top and sides. Later, refractive lenses were used to improve the light beam by bending it and directing it outward. Fresnel’s design combined the best of both of these features into a single lens. Using a bulls-eye in the center, surrounded by concentric rings of prism lenses, the entire assembly sent a bright, concentrated beam of light outward. Fresnel’s lens was readily adopted in Europe, but was late coming to America because of resistance by the Lighthouse Service. Eventually, however, the lens became the standard for lighthouses around the world. 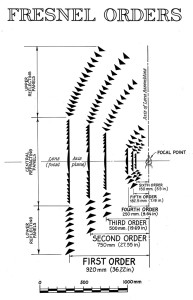 Fresnel lenses are classified by size in a series of “orders.” The largest is the 1st-order lens, which is 8.5 feet high, 6.5 feet in diameter, and weighs 12,800 pounds. The smallest is the 6th order lens. Later, smaller sizes were added, but the original classifications remain the standard.

Fresnel lenses are extremely valuable, expensive to replace or repair, and their cleaning and maintenance are very labor intensive. For this reason, most of the Fresnel lenses in the United States have been removed from lighthouses and many are preserved in museums.

Today, only one 1st order lens remains in service on the East coast north of Virginia. Located at Sequin Island lighthouse near Boothbay Harbor, Maine, that lens is valued at over $8 million and attempts by the U. S. Coast Guard to replace it with a rotating beacon failed when public opinion forced the Coast Guard to abandon the plan.

In January of 1897 the Lighthouse Board approved $3200 for a 5th-order Fresnel lens and illuminating apparatus for Spring Point Ledge Light. The 5th-order lens was approximately 22-inches tall, 15-inches in diameter, and weighed approximately 265-440 pounds. To protect it from discoloration by sunlight, the lens was enclosed by a linen cover when the lamp was not being used.

A weight-driven mechanical clockwork mechanism rotated the lens to give the lighthouse its flashing characteristic. At Spring Point, the lens clockwork was operated by a weight suspended from a cable that extended through the watch room, the assistant keepers’ quarters, into the head keepers’ quarters.

Before Spring Point was electrified, the light was provided by oil lamps burning mineral oil. Oil was stored in the basement and only enough was brought up to the lantern room to fuel the lamps for the night.

The fifth-order lens was removed when the lighthouse was automated in May 1960 and a non-rotating 375mm drum Fresnel lens was utilized until the current 300mm Lexan plastic lens was installed. The whereabouts of the original 5th-order lens was a mystery until 2009 when it was located in a private collection in Michigan, where it resides today.