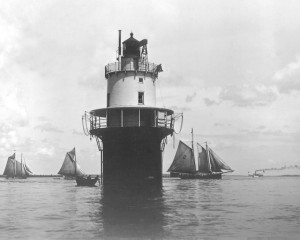 A view of the lighthouse circa 1900. The boat davits can be clearly seen, as can the privy and the ladders. A dory with keepers is nearby.

The main gallery provided the platform for entering the lighthouse and for loading supplies. The main gallery is 36 feet in diameter and was topped with a canopy comprised of 36 triangular cast iron plates hot-riveted together. The outside circumference of the gallery roof was ringed with a gutter to collect rainwater from the roof and channel it into the cisterns in the basement. Of three caisson lighthouses in Maine, Spring Point is the only one which retains its gallery roof.

The main gallery deck has two hatches on opposite sides of the lighthouse allowing access from boats. Adjacent to each hatch was a set of boat davits which held a dory for the keepers to travel to shore. A ladder beneath each hatch allowed the keepers to climb up from the boat and the bottom 10-12 feet of the ladder could be swung up out of the water. The bottom portions of the ladders were removed when granite was placed around the base of the lighthouse. 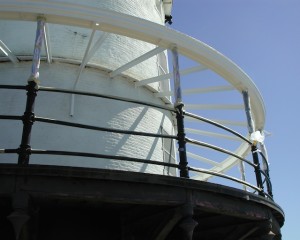 The original gallery roof plates were removed and replaced in 2004.

On the east side of the main gallery was located the privy, or outhouse. The sewage from the privy fell through a hole in the deck and into the bay. During that era, environmental considerations were not a factor. The privy was not present when the lighthouse was commissioned; how the keepers coped with that situation until the privy was built we’ll leave to your imagination.